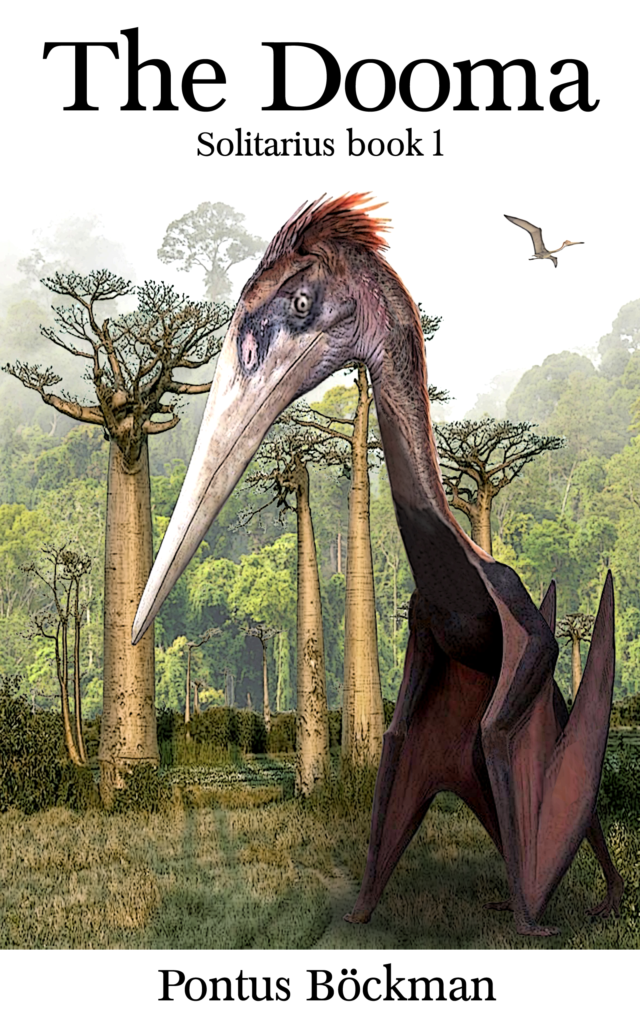 “Incoming dooma!” The cry came from one of Bolltar’s men.
I turned my eyes towards the sea. Sure enough, there they were. Four of them this time, the largest with a wingspan of about ten meters. They came in fast and low, straight at us and just slightly higher than the wall where we stood. This time they totally ignored our defenses. They swept right over us and banked right, heading directly for town. As they got there, I could see them let go of a barrage of heavy rocks.
Two of them landed on a rooftop and then hopped from one house to another, jabbing and kicking at the structures. I could see roofs collapsing. The other two disappeared out of sight as they landed behind some buildings. There were distant screams of terror and sounds of mayhem echoing back towards us as the battle raged on. Suddenly all four of them were airborne again, circling back out towards the sea from where they had come. The whole thing had taken less than a minute.
I closed my eyes and swallowed hard. What chance could we possibly have against this?
Despite the ancient scrolls, Joanthen had never considered the Dooma anything more than legend and make-believe. His main concern had been with his stupid brother Mustar, chief of the local council, and his ludicrous delusions of grandeur. That now seemed to have been a rather petty and trivial problem, as they all found themselves at the brink of extinction…
The Dooma: Solitarius book 1 will be out in the fall of 2020. *)
Published: 24 september 2020
*) Or not, as it turns out. But it IS coming!

We use cookies on our website to give you the most relevant experience by remembering your preferences and repeat visits. By clicking “Accept”, you consent to the use of ALL the cookies.
Cookie settingsACCEPT
Manage consent

This website uses cookies to improve your experience while you navigate through the website. Out of these, the cookies that are categorized as necessary are stored on your browser as they are essential for the working of basic functionalities of the website. We also use third-party cookies that help us analyze and understand how you use this website. These cookies will be stored in your browser only with your consent. You also have the option to opt-out of these cookies. But opting out of some of these cookies may affect your browsing experience.
Necessary Always Enabled
Necessary cookies are absolutely essential for the website to function properly. These cookies ensure basic functionalities and security features of the website, anonymously.
Functional
Functional cookies help to perform certain functionalities like sharing the content of the website on social media platforms, collect feedbacks, and other third-party features.
Performance
Performance cookies are used to understand and analyze the key performance indexes of the website which helps in delivering a better user experience for the visitors.
Analytics
Analytical cookies are used to understand how visitors interact with the website. These cookies help provide information on metrics the number of visitors, bounce rate, traffic source, etc.
Advertisement
Advertisement cookies are used to provide visitors with relevant ads and marketing campaigns. These cookies track visitors across websites and collect information to provide customized ads.
Others
Other uncategorized cookies are those that are being analyzed and have not been classified into a category as yet.
SAVE & ACCEPT